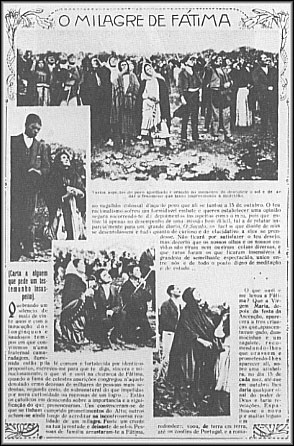 The Miracle of the Sun

In July, August and September 1917, three Portuguese shepherd children claimed that a miracle was going to happen at midday on October 13th. Thousands of people gathered in the Cova da Iria fields near Fátima on the day to witness the event. Estimates of the number of people vary between 10,000 and 100,0001,2.

Much to the surprise of local skeptics and media, the crowds did indeed witness a strange event.

After a period of rain, the clouds apparently broke to reveal the Sun spinning and moving towards the Earth in a zig-zag pattern. Witness reports included the following claims:

The event was also witnessed by crowds and individuals at different locations.

No definitive explanation has ever been offered. Without doubt something happened—the sheer number of unconnected witnesses is ample evidence. Mass hallucination is not an acceptable explanation, due to the nature of the various sightings. The phenomena cannot be ascribed to any astronomical event—there were none at the time.

The event was officially accepted as a miracle by the Roman Catholic Church on 13 October 1930.