Definition: The raising of a body into the air without mechanical aid1 or the hallucinated sensation that one is floating on air, such as that which occurs in dreams2.

Levitation – the Stuff of Dreams and Illusion

Magician, Doug Henning defines levitation as a "stabilized pure consciousness in activity, a result of perfect mind-body coordination,"3 but although shamans, yogis, and magicians have tried to reach that state for centuries, no successful attempt has ever been documented.

Still a favorite manifestation at séances and popular with stage magicians, levitation is a "mind over matter" idea that has mystified humans since before biblical times. Stephen Wagner, the paranormal guide at About.com speculates that perhaps the great blocks that make up the Egyptian pyramid and the great stones of other megaliths, such as Stonehenge, were placed through levitation4.

While the theory is interesting, there is no genuine evidence that anyone has ever levitated so much as a grain of sand. Even Levitation.Org, a site devoted to levitation admits there are but two kinds of levitation5:

The first kind of levitation was highly promoted in the 1970s by the Maharishi Mahesh Yogi. He claimed that humans were able to levitate themselves through using Transcendental Meditation (TM). After offering a series of quite expensive TM courses, the Maharishi held a levitation exhibition in 1986 at the Capital Convention Center in Washington, DC. Although the Maharishi claimed to have 40,000 enrollees in his classes, just 22 of his students performed for the press. Although, spring like, the 22 bounced up and down upon mattresses, the assembly of over 100 journalists attributed their efforts to the buoyancy of the bedding and not the efforts of the students6. 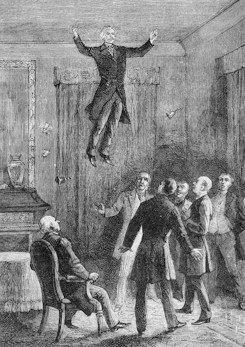 Daniel Dunglas Home levitates at the home of Ward Cheney in South Manchester, Connecticut on August 8, 1852. This illustration was first published in 1887 in the book Les Mystères de la science (The Mysteries of Science) by French psychical researcher Louis Figuier.

Although Scottish Spiritualist and medium, Daniel Home (1833-1886) was never proven a fraud, because of the dim lighting that he required for his séances, the validity of the events is often questioned.

Perhaps the most famous levitation attempt is attributed to Home. Levitation was often the main attraction of Home's séances. Participants reported hearing his voice "from above" them and seeing his shoes at face level, the sharp smell of boot polish reinforcing their belief. Yet, it's more likely that Home stood above the séance group and held a pair of newly polished boots at face level to create the effect6.

In 1868, Home performed his most famous feat of levitation at London's Ashley House in the apartment of Lord Adare. In the company of Lord Adare, Master Lindsay, and Captain Wynne, Home allegedly floated out one window and in through another. The two rooms were on the third floor of the building and connected only by a narrow ledge.

Arthur Conan Doyle later wrote about the event, relating that after putting himself into a trance, Home "floated out of the bedroom and into the sitting room window, passing seventy feet above the street." Doyle insisted that the gentlemen in attendance were "unimpeachable".

However, a number of facts arouse suspicion of chicanery.