The world-wide appetite for paranormal stories is a magnet for hoaxes. Some hoaxes are simply light-hearted fun but others have more serious consequences such as contaminating genuine research, wasting public money and destroying careers. Love them or hate them, here is our pick of the top ten paranormal hoaxes of all time (see below for our criteria)...

When Egyptian Pharaoh Tutankhamun's tomb was discovered early in the 20th Century, a curse was found inscribed over the entrance: "Death shall come on swift wings to him who disturbs the peace of the king". Before long, stories were being told about unnatural deaths of workers on the site. "King Tut's Curse" eventually found its way into popular culture and set the stage for a whole sub-genre of horror stories and movies.

In 1980 the security officer for the original excavation site admitted that stories had been circulated to scare away thieves. Historical records show that most excavation workers went on to lead long and healthy lives. 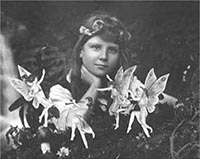 In 1917 and 1920, young English cousins Elsie Wright and Frances Griffith produced a series of photographs depicting themselves interacting with fairies. In modern times it is hard to imagine how anyone could be fooled by these obvious fakes, but in the early 20th Century they were convincing enough to attract a huge following and dupe such notables as Sir Arthur Conan Doyle.

It was not until 1981 that Wright and Griffith admitted the hoax, although they continued to claim that they had indeed seen fairies and that one of the photos was genuine. 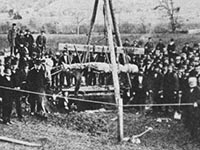 In 1869, workers digging a well in Cardiff, New York, uncovered what appeared to be the petrified remains of a giant 3-metre (10-foot) man. Archaeologists declared the body to be fake but the public reaction was more accepting, especially among those who considered it evidence in support of biblical history. The body became a business asset as crowds paid for a glimpse. Showman P.T. Barnum tried to acquire the body but eventually made his own replica, causing additional controversy over which was the genuine giant.

In December 1869, tobacconist George Hull confessed to the hoax. The body was sculpted from concrete and buried a year prior to the well-digging. 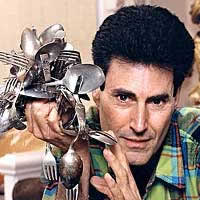 During the 1970s Uri Geller enjoyed huge success with his mentalism acts, based largely on his alleged ability to bend spoons with his mind. Geller staunchly defended his claim to supernatural powers until hard evidence finally caught up with him. A 1982 book by James Randi exposed Geller's tricks, and Geller was caught numerous times on camera manipulating stage props (e.g. pre-bending spoons). He has since earned a reputation for frivolous litigation after a series of failed lawsuits—mostly against people who publish unflattering material about him.

Despite never officially "outing" himself, Geller has tacitly confessed to the hoax. In 2007 he expressed the following change of heart: "I’ll no longer say that I have supernatural powers. I am an entertainer....My entire character has changed." 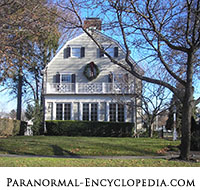 In 1974 Ronald DeFeo Jr shot and killed six members of his family in Amityville, New York. A year later the Lutz family moved in, only to move out 28 days later claiming they had been terrorized by ghostly presences. Their story became a best-selling book by Jay Anson and the basis of a series of films. The franchise has been highly successful, banking on the claim of being a true, verifiable story.

On closer investigation, however, it seems that not much if any of the story can be verified. Police and other records contradict the book's account and many holes have been found in the story. In 1979, lawyer William Weber claimed: "I know this book is a hoax. We created this horror story over many bottles of wine." 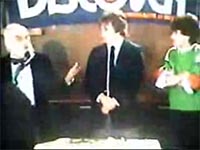 Project Alpha is the only hoax in this list to have been perpetrated as a means to debunk the paranormal. Instigated by skeptic James Randi, the plan involved planting two fakes by the name of Steve Shaw and Michael Edwards into a paranormal research project. Shaw and Edwards used simple conjuring tricks to convince university researchers (and much of the general public) that they had supernatural powers. The fallout from their eventual confession cost many people their professional reputations and the lab responsible for the research was shut down.

This episode demonstrated just how easy it is to pull off a convincing paranormal hoax. Project Alpha was the precursor to many similar debunking hoaxes, including the exposé of faith healer Peter Popoff and the psychic channeller "Carlos". 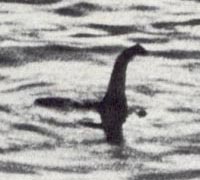 There have been many hoaxes associated with the Loch Ness Monster but none more enduring than "The Surgeon's Photo", submitted to the London Daily Mail by Dr. R. Kenneth Wilson in 1934. It wasn't the first sighting of the monster, or even the most convincing, but for decades this photo was an icon in the world of cryptozoology.

The hoax is believed to have been orchestrated by photographer Marmaduke Wetherall, who had previously been humiliated after taking photos of fake monster footprints. In a 1975 newspaper article, Wetherall's son, Ian explained how the monster in the photo was actually a toy submarine attached to a wooden neck. 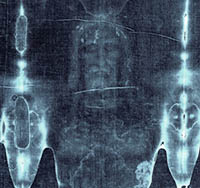 Debate still rages over the authenticity of the Shroud of Turin, believed by many to be the burial cloth of Jesus Christ. The image of a man, apparently dead from crucifixion, is most obvious when viewed as a photographic negative. The image was first revealed in 1898 by amateur photographer Secondo Pia who had photographed the shroud at Turin Cathedral.

Scientific examinations indicate that the image was made with tempera paint some time between 1260 and 1390 A.D. This fits with a bishop's claim at the time, that he had heard an artist confess to the work. Many people dispute these dates—an additional examination planned for this year (2008) should address their concerns and hopefully end the mystery once and for all. 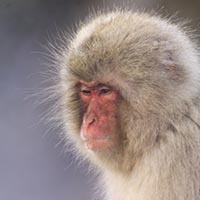 The "hundredth monkey effect" was initially popularized by two books: Rhythms of Vision (1975) by Lawrence Blair and Lifetide (1979) by Lyall Watson. Both authors relate the same story:

In the 1960s, scientists were studying a group of Japanese Macaque monkeys learning a new skill (washing sweet potatoes). At first the monkeys learned slowly by copying each other, but then something unexpected happened. When a certain number of monkeys had learned how to wash sweet potatoes, other populations of monkey located on different islands began to spontaneously acquire the same skill.

This phenomena spawned a wave of theories, including Rupert Sheldrake's morphic resonance, that suggest a mysterious connection of consciousness between living beings. The New Age movement embraced the research and it became the cornerstone of many inspirational works including The Hundredth Monkey (1984) by Ken Keyes, Jr.

Unfortunately the hundredth monkey effect never happened. According to the original research papers, the monkeys learned at a normal rate by imitating each other. The spontaneous learning scenario was entirely fictional, added later.

The hundredth monkey effect is the "quiet achiever" of paranormal hoaxes. It has never gained the mainstream notoriety of other hoaxes but it scores highly for the way it has entrenched itself in the psyche of millions, has been used as supporting evidence for thousands of other paranormal claims, and continues to be widely cited as fact—even by some academics. 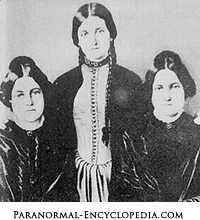 Although not well known today, the Fox Sisters are responsible for one of the most influential hoaxes of all time. Even now, more than 150 years since the original events, the effects can still be seen in the spiritual beliefs of millions of people.

In 1848, two New York sisters named Kate and Margaret Fox claimed they could communicate with a spirit in their home by means of audible tapping or "rapping". Joined by older sister Leah, the sisters toured the United States and built support for the Spiritualist movement. By 1853 Spiritualism claimed over two million followers worldwide, largely buoyed by the success of the Fox Sisters. The idea that humans might be able to communicate with spirits become a part of western culture which continues to this day. "Rappings" have long since gone out of fashion but the basic belief in communication by cryptic signals remains popular.

"My sister Katie was the first to observe that by swishing her fingers she could produce certain noises with her knuckles and joints, and that the same effect could be made with the toes. Finding that we could make raps with our feet - first with one foot and then with both - we practiced until we could do this easily when the room was dark. Like most perplexing things when made clear, it is astonishing how easily it is done."

The Fox Sisters later fell out with each other. Leah married a respected businessman while Margaret and Kate developed severe drinking problems. All three sisters died within five years; Margaret and Kate as ostracized paupers.

In a classic example of True Believer Syndrome, the confessions did not deter followers who remained convinced that the Fox Sisters' powers were genuine.

Piltdown Man: This 1912 hoax was good enough to fool the British Museum into thinking that the bones of a human "missing link" ancestor had been found. Despite its huge success, this hoax is not included in our top ten because it has low paranormal value. It could be included in the cryptozoology category but it was more of a science hoax than a paranormal one.

Alternative Medicines: While it is unclear how many alternative and complementary medicines are genuinely helpful, it is known that many of them are not. From snake oil to psychic surgery, medical fraud continues to be a major concern. We have not included such hoaxes in this list because there are too many and it is very difficult identifying the original "hoaxers".

Alien/UFO Hoaxes: These will be the subject of a separate top-10 list.