A Brief History of Paranormal Photography

Perhaps the first "ghost photo" was taken in 1860 by W. Campbell in New Jersey. The photo was of an empty chair, but once the photo was developed, the image of a small boy was discovered. However Campbell was never able to replicate this event and it is not well remembered by historians of the art.

A year later in 1861, Boston engraver, William Mumler took his own photograph only to discover the image of a dead cousin in the photograph with him. A leading photographer, William Black subsequently investigated his photographs and declared them to be authentic in nature. Mumler was able to produce several more photographs with ghostly images of individuals, some recognizable as dead relatives and others as unknown people. One of Mumler's most famous works is the photograph of Mary Todd Lincoln with the ghost of her husband Abraham Lincoln. Despite enjoying some popularity at the time, these photos are now generally considered fakes.

Mumler is widely credited with launching the popularity of spirit photography. Over the next few decades, many individuals chose to have their pictures taken in the hope of seeing some long lost relative.

It is important to note two things about early spirit photography:

Following in Mumler's footsteps, a number of other photographers sought to cash in on the spirit photography phenomenon, including Frederick Hudson (London) and E. Buguet (France). In 1891, Alfred Russell Wallace (one of the developers of the theory of evolution) voiced his opinion that spirit photography should be taken seriously. 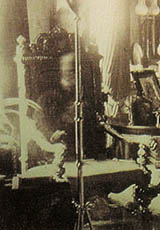 That same year, one of the best-known ghost photos of all time was taken by Sybell Corbett at Combermere Abbey in Cheshire, England. The photo was of a library room, taken with an exposure of one hour. Although the room was apparently unoccupied the entire time, the resulting photo clearly showed a man sitting in a chair. The man was identified by a relative as Lord Combermere, who had died in an accident five days earlier.

In 1911, James Coates published a book called Photographing the Invisible, in which he examined numerous cases of spirit photography. This book helped propel paranormal photography into the mainstream and brought the attention of a number of researchers.

Another boost was given to spirit photography by respected English scientist Sir William Crookes, who conducted research into various paranormal phenomena and concluded that, among other things, spirit photography was a credible pursuit.

As the sophistication of spirit photography developed, so did the understanding of fraudulent tricks. Many early photographers were shown to have used double-exposure techniques and simple plate-swapping tricks.

Although early paranormal photography was mostly concerned with ghosts, there were other examples as well, such as the first UFO photo in 1870 and the Cottingley Fairies in 1917 (later revealed as a hoax).