Definition: capable of extraordinary mental processes and sensitive to supernatural influences or forces1, 2.
Etymology: from the Greek psykhikos "of the soul, spirit, or mind". First recorded in 1895 meaning, "characterized by psychic gifts"3.

Throughout history, psychics have been both esteemed and scorned, their powers a subject of both belief and cynicism. Yet, whether psychic powers are genuine or false, psychics have played a significant role in shaping world history. In centuries past, kings planned marriages and waged battles on the advice of their seers. 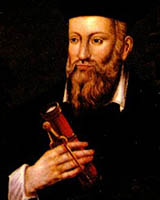 One such psychic, Michel de Nostradame (1503-1566), commonly known as Nostradamus, prophesized both natural events, such as droughts and earthquakes and political events such as assassinations and wars. Although supporters link many of his predictions to current events, because his prophecies were undated and are subject to both poor translation and misinterpretation, they aren't justified as evidence of true psychic power. Yet, the prophecies of Nostradamus remain subjects of speculation by both scholars and popular culture4.

In Shakespeare's play, Hamlet (circa 1600), the Dane was visited by the spirit of his dead father, further evidence that belief in psychic phenomena is centuries old. This belief that the dead may contact the living is also a basic tenet of Spiritualism, a religion founded in the 19th Century. Followers of Spiritualism believe that a medium is the psychic intermediary, which spirits use to contact the dead. This is in accord with the common definition of "medium", something between two extremes (the living and the dead) or something that intervenes to transmit something else, such as a message from a spirit to a living loved one.

In the modern era, psychics remain an important, if controversial part of society. Law enforcement has enlisted psychics, such as Sylvia Browne5, to help them solve crimes. The Federal Government has funded programs, such as Stargate, that examined individual powers of remote viewing, that is the psychic ability to describe a scene while up to thousands of miles removed from the location.

On the talk-show, Larry King Live, physicist Dale Graff who worked on the Stargate program remarked, "Instead of shoveling it away and saying, there is nothing to it -- which is a cop-out -- we should say: 'How does it work? What is the key to understanding this?' 5"

On the other hand, on the same program, retired FBI profiler Clint Van Zandt remarked that while he and colleagues were always "open to it" and have listened to input from psychics, in 25 years he never saw a case solved, solely on information provided by a psychic.

Part of the controversy over psychics stems not only from a lack of substantiated evidence that psychic powers really exist, but also because many self-proclaimed psychics have later proven to be frauds. 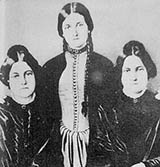 The Fox sisters, credited with starting the Spiritualism movement were such frauds. They claimed the dead communicated with them by rapping upon a table. After a successful 34-year career as psychics, they admitted that the raps were the result of cracking their toe joints. Aside from outright trickery, such as that perpetrated by the Fox sisters, other fraudulent psychics use techniques such as cold reading and "hot reading" to perpetrate deceptions, preying on the weakness and gullibility of their subjects5, 6.

Cold reading is a form of psychic deception accomplished by asking a subject general questions and using his/her answers to narrow information down to specifics in order to persuade the subject that the "psychic" has received information from the spirit of, for instance, a departed loved one. According to skeptic and author Leon Jaroff, "It's a sophisticated form of the game Twenty Questions, during which the subject, anxious to hear from the dead, seldom realizes that he, not the medium or the departed, is supplying the answers.7"

Cold readings are often used in a group of people to find a gullible individual. A very simple example:

The cold-reader may use this as an introduction, manipulating the subject to believe that his information is coming from a deceased loved one, perhaps the subject's mother. The "reading" might end with the mother's message to the subject, "Your Mother just wants to tell you that she is proud of you now. She knows that you will always find your way through life."

In cases where the first statement receives no positive response from a subject, the cold-reader alters the wording or changes the subject altogether. Perhaps the incident happened while camping, involved a camper (either person or vehicle), or while on vacation. Fraudulent psychics are very adept at manipulating the information they "receive" until they achieve a positive response.

Hot-reading differs from cold-reading in that the hot-reader does some type of research into the subject before the reading takes place and uses the information he/she finds to prove the validity of the reading to the subject6.

However, many psychics are not frauds in that they truly believe they have psychic powers and those who believe in their own psychic abilities are among the first to scoff at frauds. In a recent Milwaukee Sentinel article (Sept 2008), palm reader Paul Flowers was quoted as saying, "They're not all scams, but there tends to be potential for it." He went on to say, "That's why you only see these [psychic] networks advertised after midnight," and continued, "Certified psychics, give me a break. Universities don't offer degrees in psychic readings.9"

However, there are programs today where budding psychics can nurture their psychic talents. Both the Berkeley Psychic Institute of California and Ackley Deborah of the Psychic Readers Association recruit psychic "candidates" to train them in different techniques to tap their psychic abilities and develop their psychic skills8, 9.

Recent graduates may want to contact skeptic James Randi who offers a one-million dollar reward to anyone who can demonstrate genuine psychic powers. Additionally, the Australian Skeptics and B. Prmenand of the Indian Skeptic offer monetary awards to genuine psychics6.